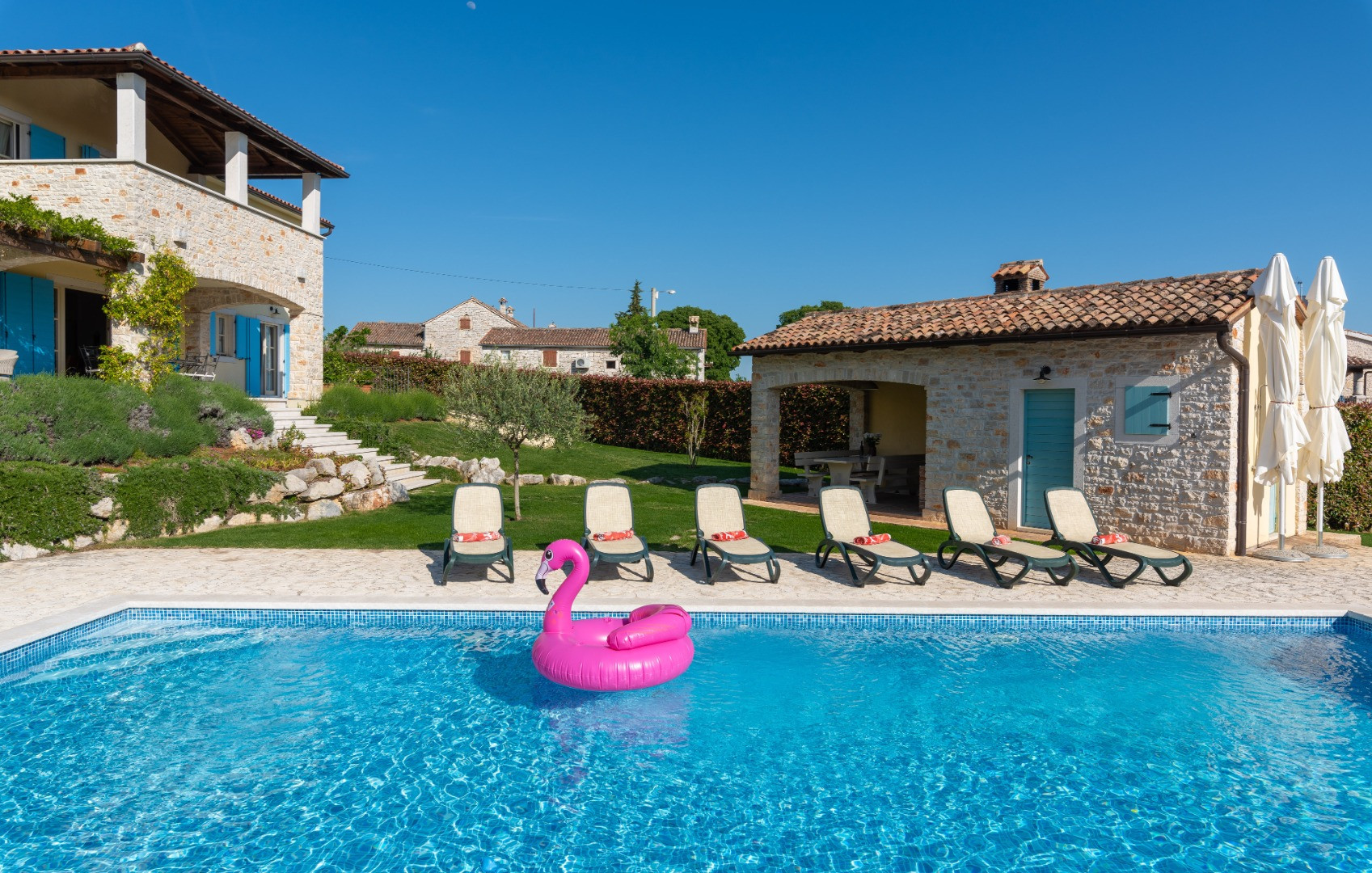 Village Heraki is in the perfect location to exploring the delights of Istria. Nearby the village is a small historical town Sv. Lovrec, where you can find shop, bakery, pharmacy, coffe and pizza place. Also, 15 km from village, there is situated well known touristic destination Porec, a town of culture, tourism, sport and entertainment. It has been recognized and awarded for the beauty of its public space and its cleanliness many times over. Porec is famous for the Christian episcopal complex and Euphrasian basilica with its distinctive mosaics dating from the 6th century which UNESCO recognized and protected as a world heritage site. Basilica is famous for its beautiful gold mosaics as well as interior and exterior architecture. We also suggest the visit of the 3 towers (Pentagon, Round and North) which were built in the 15th century and were once connected by walls that protected the old city. Near Porec there are another attractive location interesting to see: one of the most beautiful cities in the world, Venice, the Baredine Caves, the Roman Arena in Pula, the Pazin Chasm. The Baredine Cave in particular is one of many wonders of nature. Over the years the relentless work of water has shaped the stalactites and stalagmites into recognizable forms. Near Porec are situated Dino park and Aqua park, great entertainment for the cildren.

In the seaport of Porec there is a ferry that rides daily to Venice - one of the most interesting and lovely places in the world. There are also a touristics boats that rides to another lovely places like Rovinj, Lim Fjord, Briuni National Park.

We also suggest to visit lovely small towns in interior of the peninsula of Istria, like Motovoun which is world famous for truffles, Groznjan, Momjan, Oprtalj - continental towns on hilltops, famous for their fabulous views. Every town will enchant you in its own way.

If you maybe like adventures, you can hire a bike and go to cycling. Cycling trails are all around the peninsula of Istria Also, in Rovinj and Porec are situated one of the most beautiful beachs which are famous for cleanes. You can rent a boat for all day, diving and exploring the underwater world or go to fishing picnic.
For about 2 hours and a half drive from villa, there is situated the largest national park in Croatia - Plitivica lakes.
The national park is world famous for its lakes arranged in cascades.

You can also research specific Istrian wines on plenty of Istria's wine roads. The wine roads will take you from city crowds to vineyards and wine cellars. Thanks to its fertile soil and mild Mediterranean climate with long, hot summers and short, mild winters, Istria has the ideal conditions for the development of grape cultivation. There are also numerous olive groves which can take you along olive oil roads. On these roads you can taste various olive oils that liquid gold that represents a true abundance of health. The olive, a symbol of peace and health, is considered by many to be a valuable Mediterranean fruit and its oil has been called liquid gold by those who live in areas where it is cultivated. Those roads will enchant you with their natural beauty and all the colours, scents and tastes will guide you to new explorations. Furthermore, you will surely enjoy in plenty of restaurants with local traditional cuisine. Istrian cuisine, prepared according to traditional recipes for centuries, is based on the fruits of the soil and of the sea. All dishes are prepared with the addition of valuable wild plants, wine vinegar and olive oil. Every household in Istria has since ancient times prepared Typical Istrian dishes include the fresh pasta and istrian prosciutto - dry - cured meat, the unique combination of spices that give it such a distinctive flavor, istrian ham sheep cheese, maneštra - a thick boiled soup made of various vegetables with the addition of cured meat.